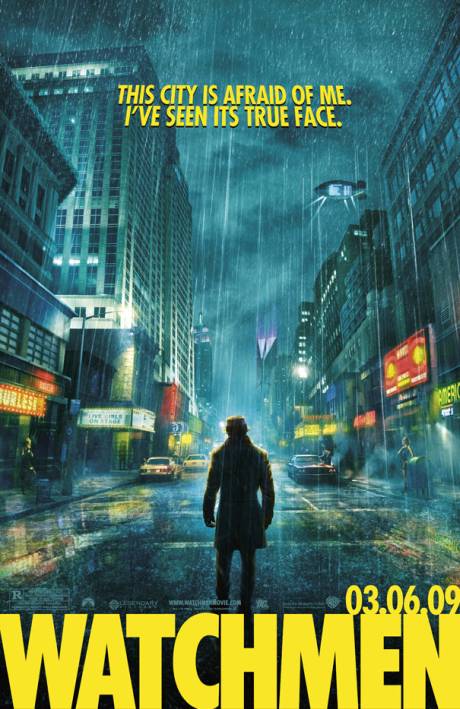 This movie was LONG. 3 hours, and most of the time it’s pacing was perfect. Except when it wasn’t. I had decided to start this movie at 11pm, so I finished it around 2am and I was pretty sleepy.

This movie has a lot going on, and I probably would have felt very lost if I had not read the graphic novel (okay, okay, “comic book”). Now, I read that almost 3 years ago (I flipped between that and a Reg Exp book during a very boring LANDesk training class), and from what I remember, the movie is nearly identical to the comic. When I first read there was going to be a Watchmen movie, I didn’t think it would pan out. I also wasn’t even interested in seeing it when it came to the big screen. I decided to buy the movie on a whim, and I’m pretty glad I did.

When I read the comic, I found Rorschach to be the most engaging and interesting character. He is a complete sociopath, hardly a “good guy”, but his unrelenting moral code that he does not budge from is great. He also has some of the best lines in the story. What is very cool about all the characters in the storyis that they are all heroes and villains at the same time. Maybe that is really what a vigilante is, and I think the story goes to great lengths to reinforce that idea, especially if those vigilantes are not kept in check. Hence the phrase “Who will watch the Watchmen?”

Rorschach is the primary detective in the story, he moves everything along. The other main characters, mostly the Night Owl and Lady Jupiter, I found a little boring. I was drifting a bit with their scenes, and I didn’t care for the romance angle.

There was also Dr. Manhattan, who aside from Rorschach, was the other well developed and entertaining character. His complete detachment from humanity proved an interesting contrast to everyone else’s struggle to stop the inevitable mutually assured destruction (remember, this story takes place in the 80’s, where the Cold War scare was rampant… I think, I mean, I’m not THAT old :) ).

The second disc had 3 bonus features, and I liked those a lot too. One covered real life vigilante’s, and provided multiple angles on how they are viewed in our society. The feature had members of the Guardian Angels, a combat trainer for the FBI, a history professor and a writer. All of them had their own rational for whether self-appointed hero’s were needed or even justified.

Another cool feature was an interview with a Physics Professor as the science consultant of the movie. Which was fantastic, and super nerdy. I thought it was great that even a movie based on a comic was trying to maintain a balance between the story and plausibility. I thought he did a good job.

So, to summarize, I really liked this movie. It was fun, sometimes a little too graphic (it has this hyper-stylized feel to the violence, and it didn’t feel necessary all the time), and it continued to make me think about the story over the week.